On March 6, 1640 Marc Anthony Barbarigo was born in Venice. His was a serene childhood, nurtured by love from parentes and education by teachers, which contributed in a decisive way to the formation of his future personality.

At twenty-five years old, he received the “toga” of patricians (bicame a lawyer) and entered and became by right part of the Grand Council of the Venetian Republic. This exterior sign of his nobility does not make him feel differently than others, nor does it remove him from his religious obligations and his charitable works.

The young Marc Anthony allows himself to be led by the fatherly hand of God; “he gows along the journey of his vigor” (Ps 83:8) while He opens for him the horizon of life with the clarity of light. From a brilliant political career in the Republic of Venice, the young Marc Anthony moves into priestly ministry.

To the Saint’s School

At St. Gregory Barbarigo’s school, as a great reformer of cultural, spiritual and pastoral life at Padua, he desires that his collaborator, Marc Anthony, confirm his choices, grow in pastoral charity and acquire vast experience above all in the catechetical realm. 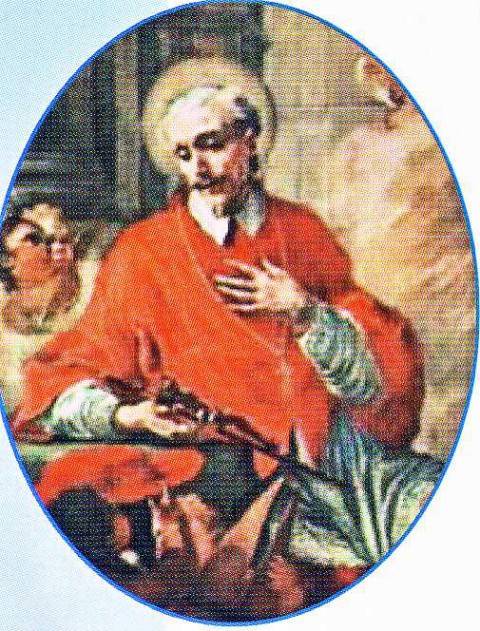 The two priests grow together in the most beautiful friendship: each for the other, that friend which the Bible defines as a treasure, “sturdy shelter”, “life-saving medicine” (Sirach 6:14-16). Gregory never fails to recognize the interior richness in the young man and to foresee in him a promising future.

A Life of Ministry

Named the Archbishop of Corfu, Marc Anthony is by now ready to exercise effective apostolic work. In a climate of a new prayer style and a demanding spiritual path: he puts in first place the sanctity of life itself, that of priests and of the Christian people.

At Corfù, he directs his care as Pastor to the formation of the clergy and to the instruction of Christian Doctrine. His sensibility moves him to make efforts towards the weakest, the poor, the imprisoned and the sick, to whom he offers his personal material and spiritual assistance.

“Being a bishop consists in serving the people, hesping the poor, correcting vices, to make virtue flourish, to prevent scandals, even to the point of giving one’s life. The Bishop must endear himself to the most poor of the diocese and hold the poor as his “masters”; guarding himself from vanity, pleasing to God and not to the world. For being great in Heaven one must be “little” on earth!” (Marc Anthony Barbarigo).

Pope Innocent XI elevates him to the rank of Cardinal on September 1, 1686. Montefiascone is the new and last Seat of Marc Anthony Barbarigo, the land destined largely to receive the gift of his rich experience accumulated in the years lived in Padua and on the island of Corfù.

He took over the region’s diocese in October 1687. He urderstood profoundly the responsibility given to him when he writes: “The Church of Christ is not a garden of repose but a vineyard to work.”

The widespread corruption of customs of that territory does not let him rest. Through a precise pastoral program and with the help of preaching Missions for the people, he transforms his diocese into a “delightful vineyard”, with the abundant fruits of conversions and charity.

“With that I am, I must pursue personal sanctity, that of the clergy and that of the people entrusted to me; the rank of Bishop is a state of perfection, for which I more than anyone else must imitate the sanctity of Jesus Christ. the true exemplar of Bishop!”

In fidelity to thy Council of Trent, the Cardinal constructed a large and functional seminary.

Another great sign of Marc Anthony Barbarigo was that of opening a school of Christian Doctrine in his diocese in order to instruct the children of the people, who lived in the most absolute neglect and misery. He invites a holy woman, Rose Venerini, for this project who was already doing it at Viterbo. Schools were opened at Montefiascone and in various parts of the diocese but Rose Venerini had to return to Viterbo.

Barbarigo discovers in Lucy Filippini the faithful disciple, the chosen daughter, the Teacher for his schools, the cornestone on which to place the foundation of the new Institute. Both of them, with a call to this life, carry deeply written in their hearts, the same mission to accomplish: to cry out the love of God on the pathways of men, bend down to serve human misery, to educate the young in the Christian meaning of life, for a reconstruction of family in the ordering of life itself to sanctity.

In the societal context in which the average woman was marginalized, Barbarigo reopens the most beautiful pages of the history of the Church with his distinguished figures of the Virgins, dedicated to multiple charitable and apostolic activities, dreaming this way of his future Sisters, inventing the new, that is, a form of active life in the Church, an Institute of consecrated apostles. The trust that the Cardinal places in Lucy Filippini is limitless.

If the poor are “his masters”, the schools are “the pupil of his eyes”. With a true anticipatory sense of the times, he sees the School as the environment of life, the “gym” of formation to authentic values, the instrument of human and Christian promotion.

Marc Anthony Barbarigo exalts the dignity of women, attributing to them an active role in the Christian community. He feels that the presence and the collaboration of women, especially if consecrated, contributes to the profundity of the Church. Just this profound conviction moves the Cardinal to give life to a family of consecrated Teachers. In the mind of Marc Anthony, sanctity of life empowers his Sisters to mission; every other qualification has negligible value if she is only illuminated by her beauty.

Mar Anthony Barbarigo dies in holiness on May 26, 1706. He remains a witness for all times: yesterday, today and tomorrow, a luminous example of love, grace, and charity in the dedication of his very existence of service to the most needy. His cause for beatifications is in process.